Day's uploads - the current day only

This is a collection of some my uploads for the current day only, i.e. the only ones that can appear on smugmug's 'popular home' pages, what they call today's site-wide so-called popular photos. Photos won't stay on those pages without at least one comment from a different user besides myself. 'Retired' uploads from past days are collected here, in reverse order of upload: https://arctangent.smugmug.com/ExploreSampleSavorEnjoy/What-I-and-other-viewers-like/Uploads-I-have-featured-by-date-uploaded/

Please note, my inclusion of photos in this gallery does not in any way indicate an expectation that they will or should receive comments. That choice is, and always has been, entirely up to the viewer.
Read More 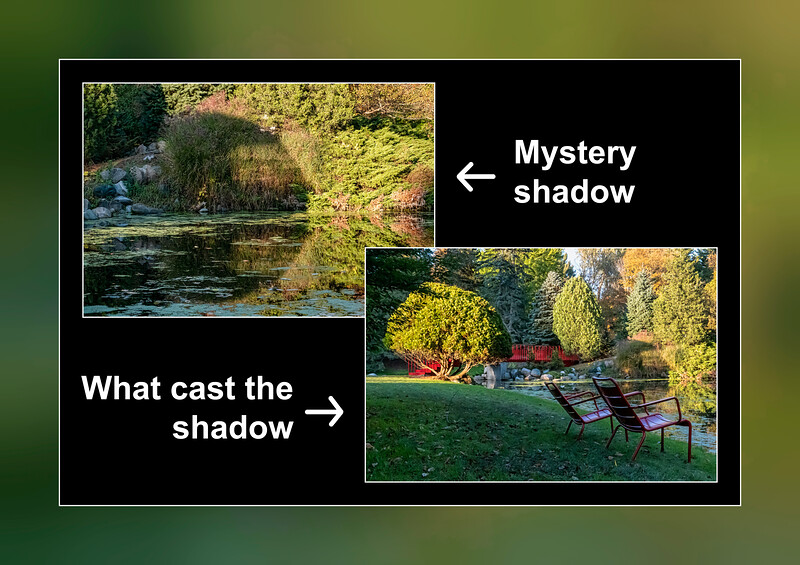 A strange shadow and its source

I noticed the strange round shape (shadow & its reflection) after I had photographed the general scene of the pruned evergreen, the source of the shadow, and the red chairs and red bridge.

It was getting late in the day and I was in a hurry to photograph some other parts of the gardens before I lost the light. I regretted, after the fact, not getting a shot that showed more clearly the connection between the evergreen and its shadow.

It was mere happenstance that I found myself in the right place at the right time of day to see the shadow and its reflection as a nearly perfect circle.