These are my entries for the alphabet challenge proposed by Judy Horton, to begin June 3 and proceed with weekly entries. When I have alternate choices for a given letter, I'll include them here as well. My captions are designed so the gallery can be sorted alphabetically.

My intent is to have each entry be something from the worlds of art or archaeology (either an artifact or an archaeological site). It is also my intent to represent as many different sources (museums, venues, etc.) as possible. Not every picture will be recently taken, but for the most part each entry will be newly processed specifically for this challenge.
Read More 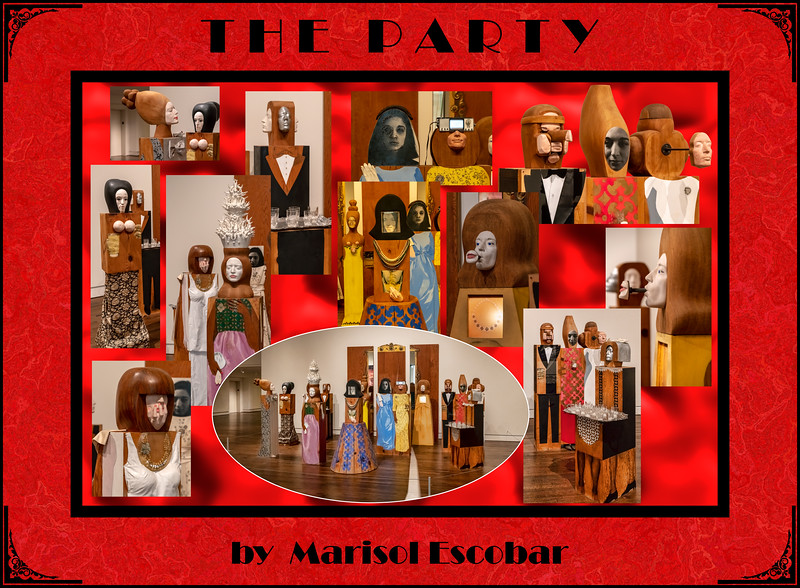 The work shown is titled “The Party”, by the artist Marisol Escobar. Later in her life she preferred to be known simply as Marisol, but there is a possibility of confusion with other artists with that same first name if you simply google ‘Marisol artist’. The information card supplied by the museum (TMA) describes the work thusly:
“Assemblage with 15 figures and 3 wall panels with painted and carved wood, mirrors, plastic, television set, clothes, shoes, glasses, and other accessories, 1965-66.”
Also,
“…Each face of the 15 life-size figures is modeled on Marisol’s own – whether photographed, carved, or cast in rubber or plaster…Amusing, satirical, even biting, ‘The Party’ highlights Marisol’s personal alienation from the rituals of high society, while communicating a broader commentary on the shallowness inherent in some forms of social interaction.”

The individual photos and the montage itself (created in September 2018) are copyrighted by Elizabeth Jean Jacob, with all rights reserved.