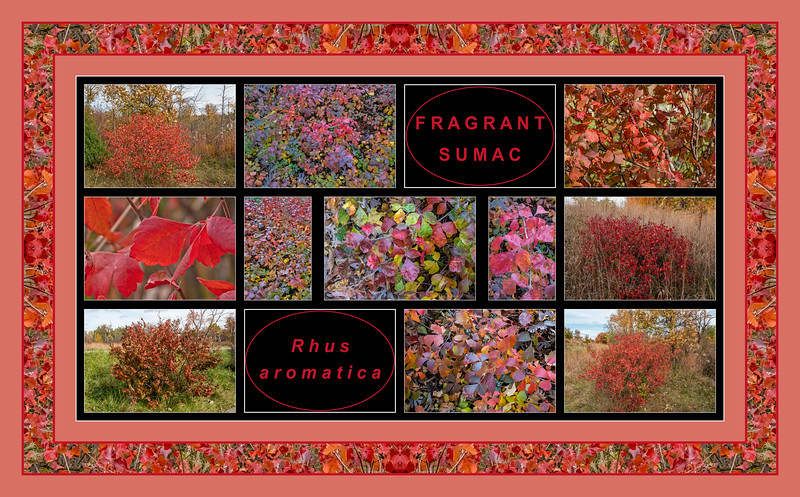 Fragrant sumac, Rhus aromatica, is one of the four sumacs that can be found growing wild or naturalized in southern Michigan. I have featured the other three in earlier primer posts (staghorn and smooth sumacs, R. typhina and R. glabra, 4a; shining or winged sumac, R. copallina, 4b).

The leaf shape (sort of diamond shaped with rounded serrations) and leaf arrangement (three-leaf or tri-foliate) of fragrant sumac differs from that found in the other three types of sumac. In fact, the trios of leaves look eerily like those of poison ivy. However no part of this plant is poisonous or a skin irritant. Recent revisions in taxonomy have moved poison ivy out of the genus Rhus into the genus Toxicodendron. Both genera are in the pistachio family Anacardiaceae, which also includes cashews. Thus sumacs, pistachios, cashews, and poison ivy are all related by belonging to the same family, the next stage up from genus in plant hierarchy. Interestingly, “The shell of the cashew nut contains oil compounds that can cause contact dermatitis similar to poison ivy” [Wikipedia]. In addition to the easily recognizable leaves, the buds on the plant are very distinctive, having a kind of herringbone pattern of light and dark.

[Wikipedia] (fragrant sumac) “grows in upland open woods, fields, barrens, and rocky cliffs.”
And
“The leaves and stems of fragrant sumac have a citrus fragrance when crushed, hence the species name.”

Unfortunately, I didn’t know the identity of the plants I photographed until it was too late to test the leaves for fragrance when crushed. I look forward to trying it next year.

The native fragrant sumac turns beautiful shades of red and orange in fall. I found it growing in open fields, in stands of upright branching stems that had reached heights of 4-6 feet, and spreads of perhaps twice that in width. In addition to the native fragrant sumac, there is at least one cultivar that is popular in landscape plantings, It’s called Fragrant Sumac ‘Gro-low’. The name says it all. The plants are short, 1-2 feet tall, and spreading. They are more like a ground cover than a shrub. This cultivar produces a rainbow of colors in fall, very similar to that on the spiraea prunifolia (bridal wreath spirea).