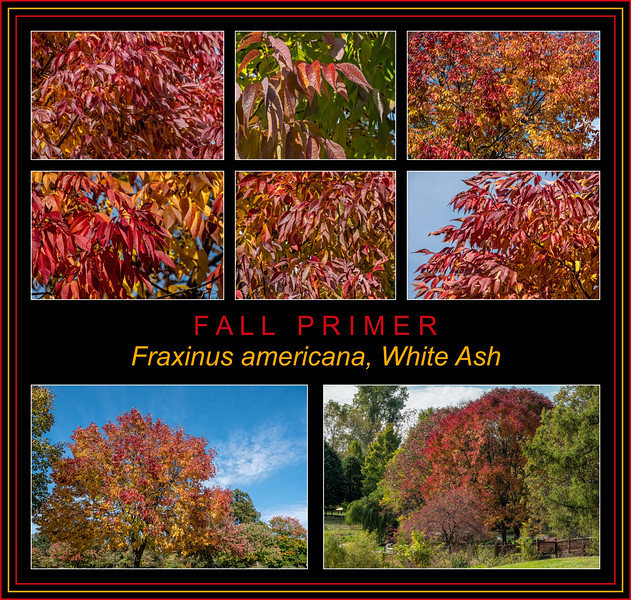 Native ash trees are a vanishing breed, thanks to the near total devastation wrought by the emerald ash borer beetle. Until that plague arrived, ash trees were one of the most popular plantings on street parkings and boulevard median strips, in city parks, in yards. Part of their popularity was their general hardiness in the face of air and water pollution. In autumn their blazing foliage was a constant delight as one drove around town. All that is now a memory.

Isolated pockets of ash trees survive in Michigan and Ohio. This year I photographed two sets of them. One is in Emerson Park, Midland, Michigan, and the other, consisting of two small clusters of trees, is in the Toledo Botanical Gardens. Both groups are white ash, aka American ash, Fraxinus americana. The trees in the Toledo Botanical Gardens had plant labels that further specified the variety, namely ‘Autumn Purple®’.

In autumn white ash trees develop a characteristic spectrum of leaf color that is present in each individual tree. It runs from deep yellow, through bronze, to red. Some cultivars further develop purplish red, and even deep maroon colors. The tree tops tend to be color-weighted toward the darker tones.

Like hickory leaves, as I described in FCP 3, ash leaves are compound. Unlike in hickory leaves, though, the leaflets are all about the same size, and have slightly toothed or serrated edges. Typically, white ash leaves have 5-9 leaflets that are paired opposite each other on the stalk, with the odd remaining leaflet at the tip. It isn't easy to discern the compound structure of the leaves from photographs of masses of leave on the tree. I included one detail shot, top center, which partially reveals the leaf structure.

Trees that aren't crowded by neighbors or other obstacles develop a pleasing rounded shape such as seen in the two landscape views in this poster.

Full resolution, uncropped versions of each frame are in my 2019 Fall gallery, here: https://arctangent.smugmug.com/SeasonsoftheYear-3/4th-Fall/Fall-Annual-Observations/2019-D-Fall-is-Calling/