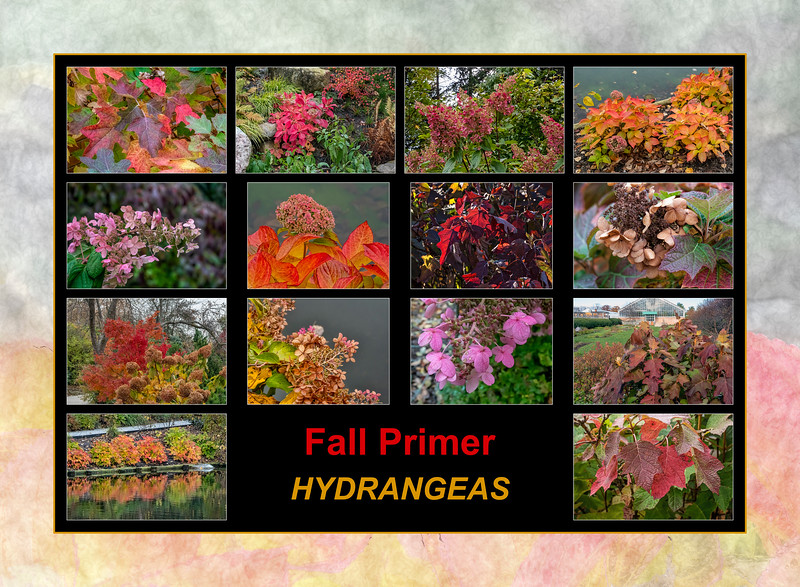 Fall primer: Hydrangeas in the fall

Fall primer: Hydrangeas in the fall

Hydrangea is a genus of flowering shrubs that comprises 70-75 species. All but about half a dozen are native to Asia, with most of those being found in the wild in eastern Asia, primarily China, Korea, and Japan. Almost all of the species of hydrangea are deciduous. They bloom from spring through the summer and deep into the fall season. Even when the leaves of many trees have turned and begun to fall, hydrangeas can continue to produce their charming colored flowers. Some have foliage that turns a range of hues which may be muted or may be as vibrant as any of the surrounding trees. Some hang onto their spent blooms without dropping any petals, and these dried flower heads provide additional interest to the fall landscape.

There are a vast number of hydrangea cultivars. For example one online resource I use, garden.org, has more than 800 separate entries for hydrangeas in its database. Because of the growth habit of most hydrangeas, plant labels for shrubs that are attached or placed on stakes nearby when shrubs are first planted in botanical gardens and arboretums eventually become obscured or inaccessible. For that reason, I rarely know the exact identification of individual hydrangea cultivars that I photograph. I can generally place the specimens in one of four main groups: Big leaf (H. macrophylla), panicled (H. paniculata), oak leaf (H. quercifolia), and everything else.

In my poster for hydrangeas in the fall, I’ve included shots of oak leaf and panicled hydrangeas, and some shots which might be of big leaf hydrangeas (the type that produces so-called mophead or pom-pom or snowball shaped flower heads), or might be some other species. I’ve tried to give a sense of seeing hydrangeas in a fall landscape, as well as seeing them up close for their leaf and bloom details. The photos were all taken in mid to late October and early November in southeast Michigan, west central Michigan, and northwest Ohio.