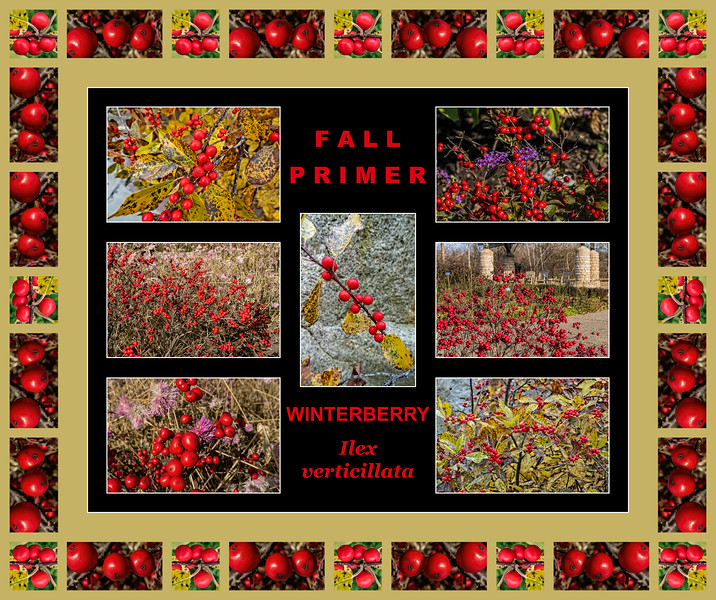 Winterberry is a popular garden and landscape planting in the USA. It’s a native North American deciduous shrub that is planted primarily for the bright color interest from its red berries which begin to stand out when most of the flowers in the garden have died and dried up, and the foliage has died back. The berries stand out especially vividly on bare branches in late fall and through the winter, but some winterberry plants in some years also produce yellow fall foliage that catches the eye.

You might not be aware that Ilex is the genus that includes hollies. Most people envision the English form, I. aquifolium, which has the glossy dark green leaves with their wicked bristles, and the bright red berries, when they think of holly, though they may not realize it’s the English holly they’re thinking of. There is a very similar North American form, I. opaca, which is more cold hardy and grows larger than the English form. But ilex species, of which there are more than 400, come in many forms, some evergreen like the aforementioned hollies, but some deciduous like the winterberry.

If you’re wondering what the berries taste like, forget it. All parts of all hollies contain alkaloids that are mildly toxic to humans and more so to pets.
From https://homeguides.sfgate.com/winterberry-poisonous-78144.html
“The berries contain an alkaloid called Theobromine that is almost identical to the caffeine found in coffee and tea, according to the Nova Scotia Museum. Large quantities of Theobromine can cause symptoms similar to a "caffeine overdose," such as dizziness, nausea, diarrhea, stomach pain, an elevated pulse or drowsiness.”

The berries of I. opaca and I. verticillata are happily eaten by birds, but the birds may appear to shun them at first, leaving the berries to persist deep into winter. The berries initially are hard enough that the warm weather bug eating birds whose beaks aren’t adapted to cracking open their food have difficulty eating them in that state. After a number of freeze and thaw cycles, the holly berries become soft enough for these birds to eat them.

Holly plants, i.e. species of ilex, are dioecious, like the ginkgo biloba and the black gum tree that I’ve described earlier in this primer. That means that only the female plants produce berries, and then only if there is a male plant available nearby for pollination. Furthermore, not all hollies that bear berries produce red ones. There are species with black, white, and even yellow berries. Interestingly, birds seem to prefer the red berries over those in other colors.