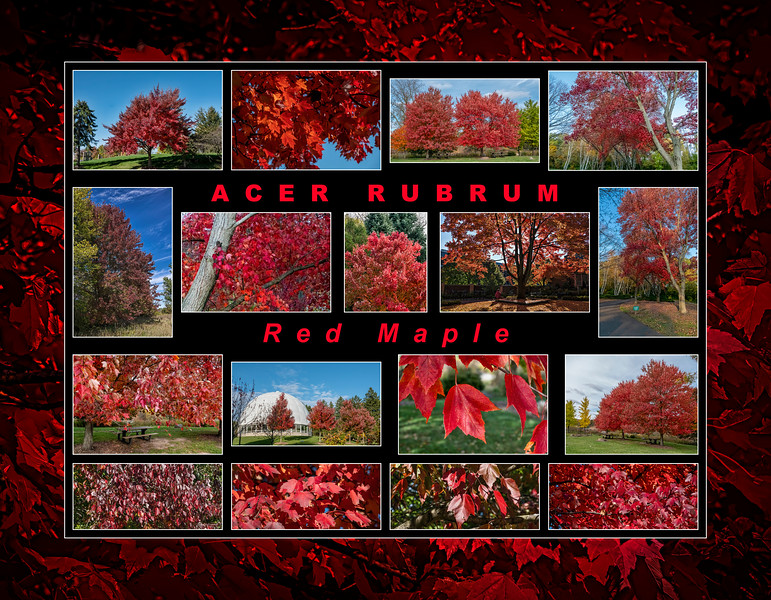 Acer rubrum, red maple, is a native North American tree with a natural range that spans most of the eastern half of the U.S. except for northern Illinois, and extends west of the Mississippi into Minnesota, southeastern Missouri, Arkansas and Louisiana. It tolerates a wide range of soil conditions, but is not shade tolerant. It can dominate regenerating forests, but recedes as forests mature. I find it locally almost exclusively as planted specimens in yards, parks, cemeteries, arboretums, etc. In contrast, sugar maples occur reliably in nearly every mature woodland I see.

In the fall, red maples turn to brilliant shades that range from slightly orange of true red, through blazing scarlet, all the way to a rich maroon red, depending on the year, and the cultivar, among other factors. The leaves are easy to identify (and to distinguish from other maples). They’re mostly three-lobed palmate with serrated edges, but can also be five-lobed. They’re smaller than the leaves of sugar maples, too, being 2-4 inches long typically. The tree is called ‘red maple’ not just for its red leaves in fall. Virtually all parts of the tree apart from the bark are red at some point in the annual cycle. Buds, blooms, seed casings (samaras or keys or copters), twigs, even the stems of the leaves.

Where I live, southeast Michigan, red maples come into their full glory after the sugar maples have done their thing. They typically reach peak color in late October, and the color extends into early November. There can be significant variations among the various cultivars, both in timing of the color development and the actual colors achieved.