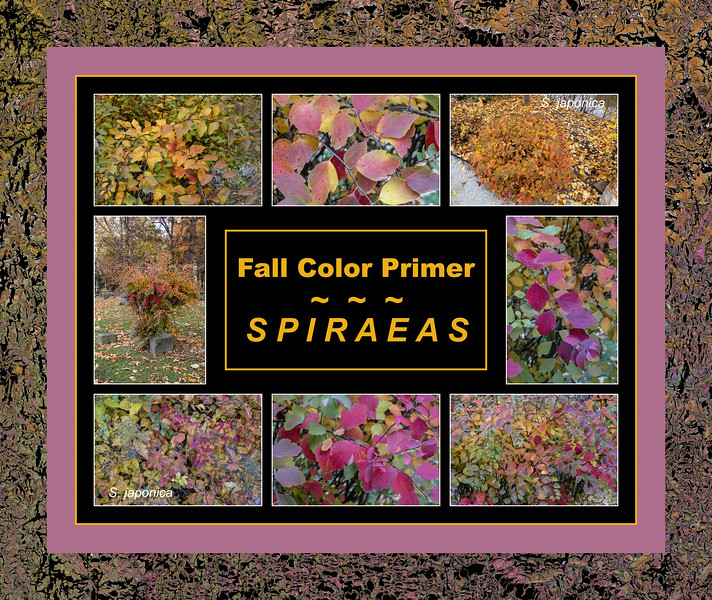 Caveat: I don’t yet have good photos of a range of spiraea plants. This primer entry will have to be updated when I get better examples. Maybe next year…

There are many species of spiraea in cultivation, each with their own set of cultivars. Many go by the common name of meadowsweet. Common names may also contain the spelling ‘spirea’ instead of the true genus name ‘spiraea’. I’m rather late to the game in paying attention to the various spiraeas in the locations where I do most of my plant photography, and for purposes of this primer, I only have photographs of S. prunifolia, the old-fashioned bridal-wreath spiraea, and of S. japonica. I’ve labeled the two S. japonica photos in the poster.

S. prunifolia was once an extremely popular yard planting, as well as a staple throughout cemeteries in the parts of the country where it is hardy. It’s best known for the draping plant growth, urn-like you could say, which in good years is literally covered with distinctive quarter-sized clusters of tiny white blooms in late spring, or early summer, often in time for Memorial Day. It is falling out of favor these days, and being replaced with smaller, ‘better behaved’ species, or modified cultivars of the original species type. It can produce a lovely range of fall colors, however, all on the same plant at the same time, so individual plants can have a kind of rainbow appearance.

S. japonica is typically a low-growing shrub. Its various cultivars can produce blooms in a range of colors. The flower clusters are larger than those of S. prunifolia. The dried seed heads from these clusters may, if not dead-headed, remain prominent through the fall season and can produce the illusion of a lacy or gauzy coating atop the colorful foliage. S. japonica is much prized in general for the colors it produces in fall. I wish I had better photos of it to share with you.