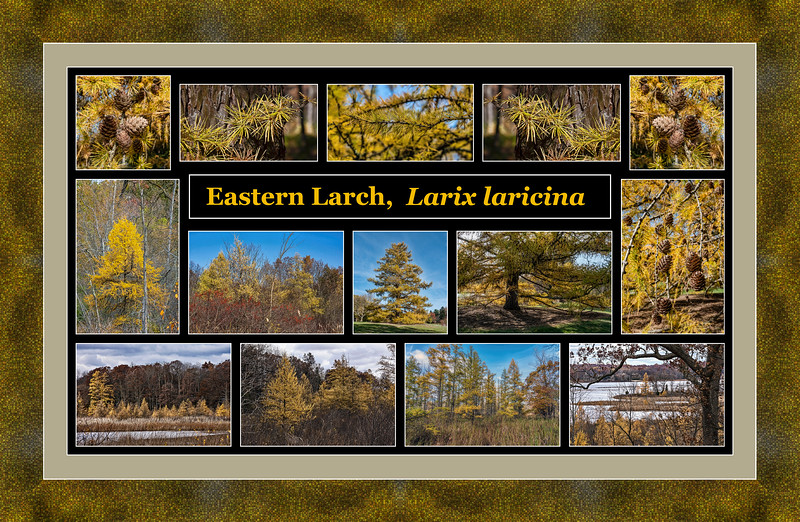 The eastern larch is a deciduous boreal conifer that is primarily a Canadian species. The southern edge of its range extends into Minnesota, Wisconsin, Michigan and far northern Ohio, and the very northern parts of the northeast USA. It can be found further south in mountain regions, where it is cooler. Other common names include tamarack, hackmatack, black larch, red larch, and American larch. The name hackmatack is derived from an Algonquian word ‘akemantak’, a name for larch that translates as ‘wood used for snowshoes’.

In the fall the larch needles turn a bright golden yellow. Because larches prefer low, flat swampy or boggy terrain in Michigan, they stand out strikingly in the landscape, especially if there is dark forest surrounding the open areas where they grow. Since larches turn late in the fall (late October or early November where I live), most of the forest trees have lost their leaves, or the remaining leaves are typically brown oak or beech leaves. Larches are the only color game in town in those wild spaces in terms of trees, though there may be color in the surrounding shrubs, such as bright red from winterberry. Larches can be found planted in arboretums, parks, botanical gardens, etc., but they’re rare as yard plantings. Being able to walk up close to, walk around, even walk under, among the low branches of a mature larch at this time of year is a special treat, especially on a sunny day when the whole tree is glowing from its tip to its ground-sweeping lower limbs. In swampy settings, such a close approach isn’t possible unless you’re wearing gum boots, so finding planted specimens on drier ground is essential for such an experience.

Like many conifers, larches are monecious. They bear both male and female cones, but again, as usual, it’s the female cones, the seed bearing cones, that are the most conspicuous, i.e. the ones people think of when they think of larch cones. The cones of the eastern larch are the smallest of any larch species. The mature ones resemble small brown roses, a mere ½ to ¾ inch long.