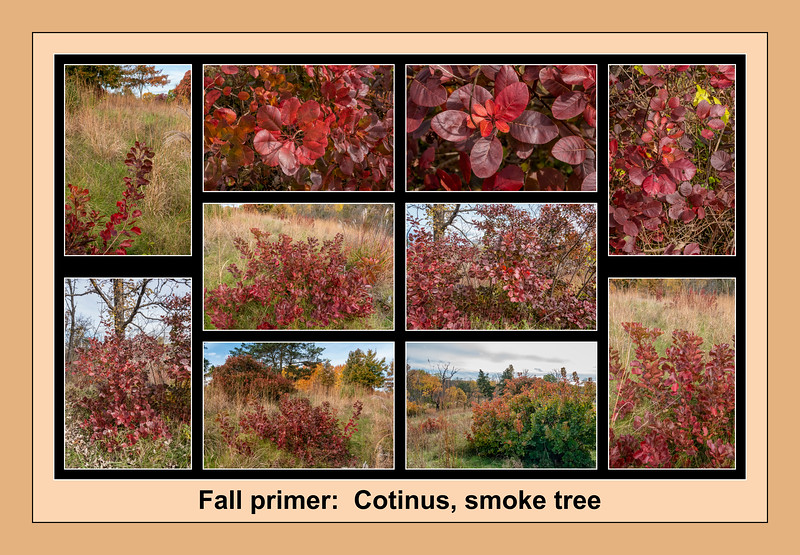 You might not be familiar with this plant, so I’ve tried to convey a little of what it’s like to see it growing in its natural environment and something of its growth habit as well as the color it displays in fall with my selection of photos.

[Wikipedia] “Cotinus is a genus of two species of flowering plants in the family Anacardiaceae, closely related to the sumacs (Rhus).” They both grow as large shrubs or small trees. One is native to North America, C. obovatus, and the other to Europe, C. coggyria. They are recommended for hardiness zones 4-9, and are considered highly drought-tolerant.

The common name for both species is smoketree, smoke tree, or smoke bush, so named for the flowers that “are clustered in a large open terminal panicles 15–30 cm long with a fluffy grayish-buff appearance resembling a cloud of smoke over the plant”. They were once classified in the same genus (rhus) as sumac. Unlike sumac their leaves are simple (not compound or pinnate).

Of the two species, it is the North American one, C. obovatus, that typically provides the better fall foliage colors. Apparently, the European type, C. coggyria, is the more commonly cultivated one. I discovered several patches of cotinus in the naturalized meadow area at Matthaei Botanical Gardens this year (2019). I’m not sure which of the two species it is, even after prolonged perusal on online descriptions and photos. For now, without further speculation on the point, I’ll just call the plants I photographed cotinus.

The predominant color in the leaves is a deep wine red, verging on purple. Some leaves were more scarlet, and some looked slightly orange, especially when backlit, or when still in transition from green to fall colored. The leaves are slightly glossy, and round or slightly elongated, with smooth leaf margins. They are borne on relatively long stiff stems that hold them out from the branches without any drooping. The growth habit seems to be to produce densely packed long branches or trunks that have little or no side branching. When surrounded by the light tan of dried meadow grasses and wildflowers, these shrubs are very striking.